I looked for an even easier right-click and done solution on the internet and couldn't find one. Therefore I wrote my own. As a starting point, I read the tutorial on context menus under Windows 7 at http://www.howtogeek.com/howto/windows-vista/how-to-clean-up-your-messy-windows-context-menu/. From there, I extrapolated the following solution:

In case your IPython executable is not located in the "C:\Python27\Scripts\ipython.exe" directory, please make changes accordingly. 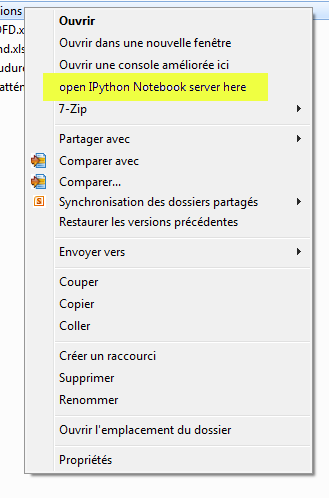 That's it! You can now use the IPython Notebook in an even faster way.

Edit November 27th, 2013: I realized Windows was having trouble whenever I used this command with a path using accentuated (French!) caracters. I found an alternative way of launching the server with the following command:

This proceeds in a slightly different manner: first, a shell is opened in the directory sent by the command, second the IPython executable is called with the notebook extension.